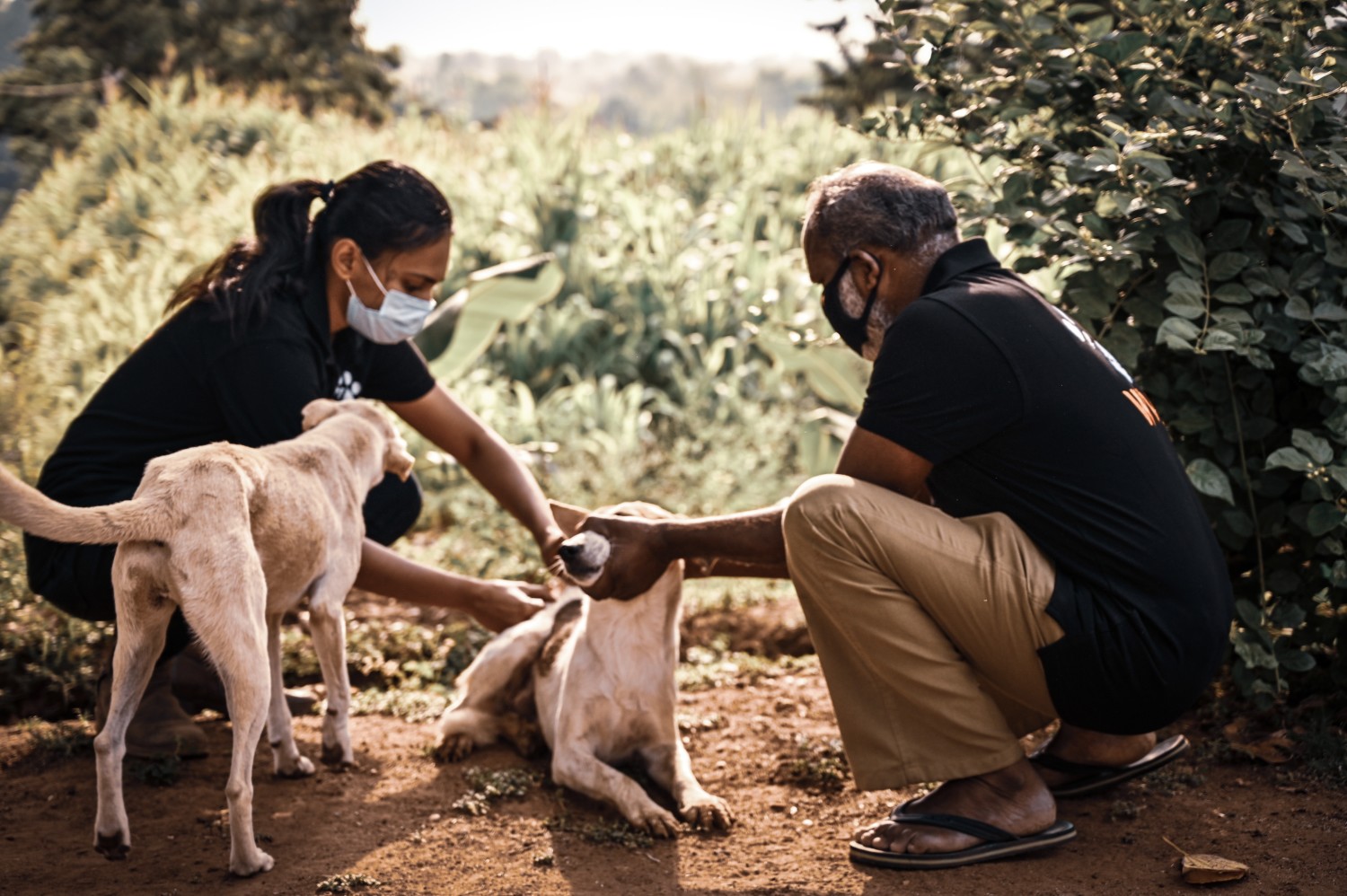 India: Vaccinating dogs against distemper along the borders of a tiger reserve

Veterinary care does far more than treat injuries and disease, it prevents ecosystems from being disrupted, diseases being introduced, and stops habitats from becoming overwhelmed and overpopulated. In the villages surrounding the Mudumalai Tiger Reserve (MTR) in India, one of our latest projects, did just that. We called it the Durga Project after our partner who helped fund the project, the Durga Wildlife Fund.

With the support of the Durga Wildlife Fund, our veterinary team in India vaccinated and sterilized free-roaming dogs in the MTF buffer area. We’re talking about the area bordering the declared tiger reserve, which is home to several endangered and vulnerable species including the Indian elephant, Bengal tiger, and Indian leopard, as well as many rural indigenous communities.

In places such as this, where domesticated animals and wildlife live within such close proximity, disease transmission between the two is common and often deadly. Canine distemper, a nasty virus that causes a wide range of symptoms including a cough, runny eyes, and nose, diarrhoea, high temperature, thickened pads, tremors, and fits, is one of the most common.

As it is difficult to immunise wild animals, the best solution to prevent a spillover from the domestic dog population to wildlife is to immunise the dogs. That’s right, we vaccinated dogs to protect dogs, tigers, and many more wildlife species. 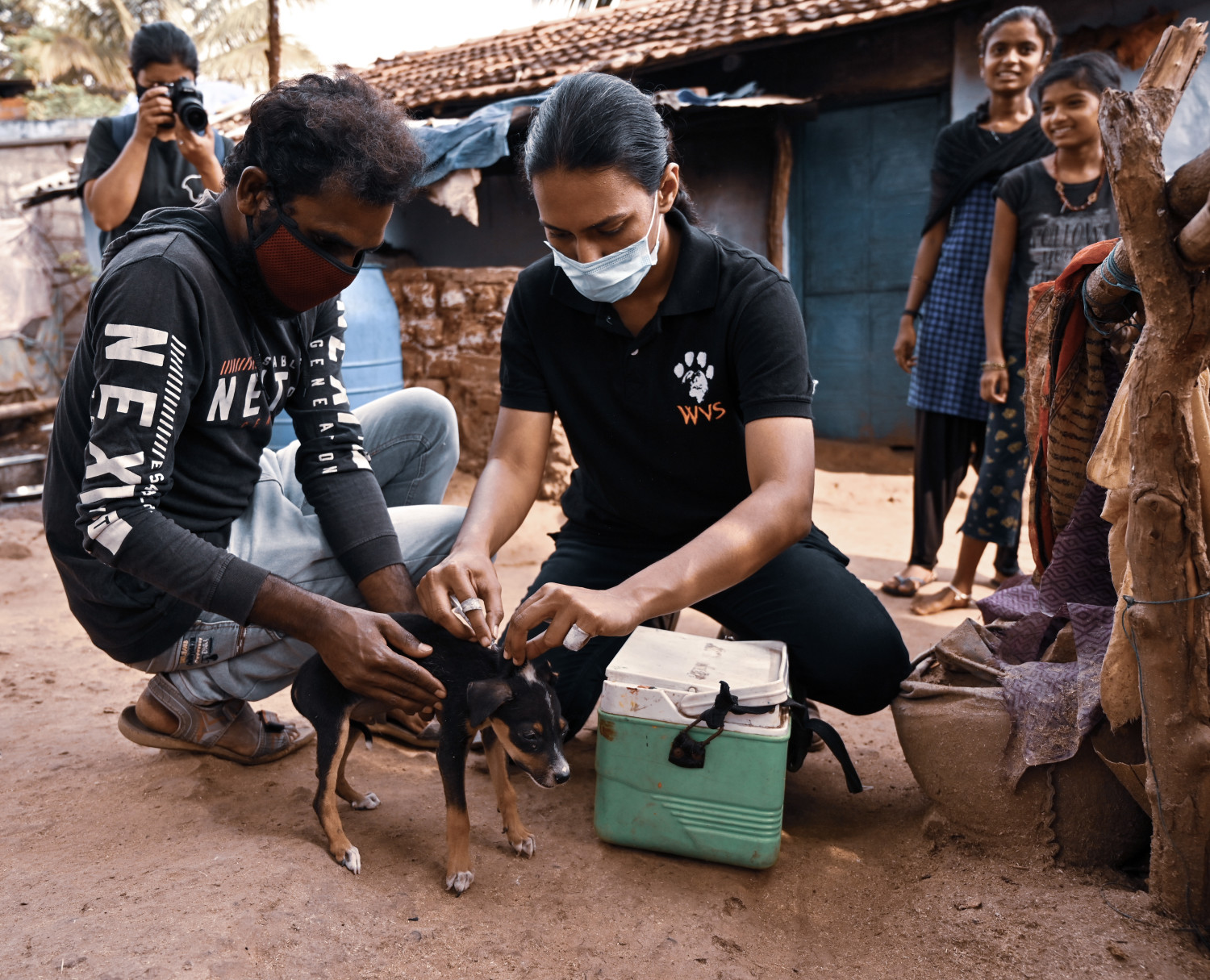 The vaccine that we administered is commonly known as six-in-one, providing the dogs with immunity against distemper, parvo, hepatitis, and strains of leptospirosis. But, that’s not all. As you may know, protecting dogs against disease with a vaccine is just the first step.

Alongside our vaccination work, we delivered humane animal population control. By neutering and spaying dogs the dogs we vaccinate, we can reduce overpopulation and alleviate all the suffering that comes with it - everything from the transmission of disease to the shortage of food and shelter - and create herd immunity against disease. 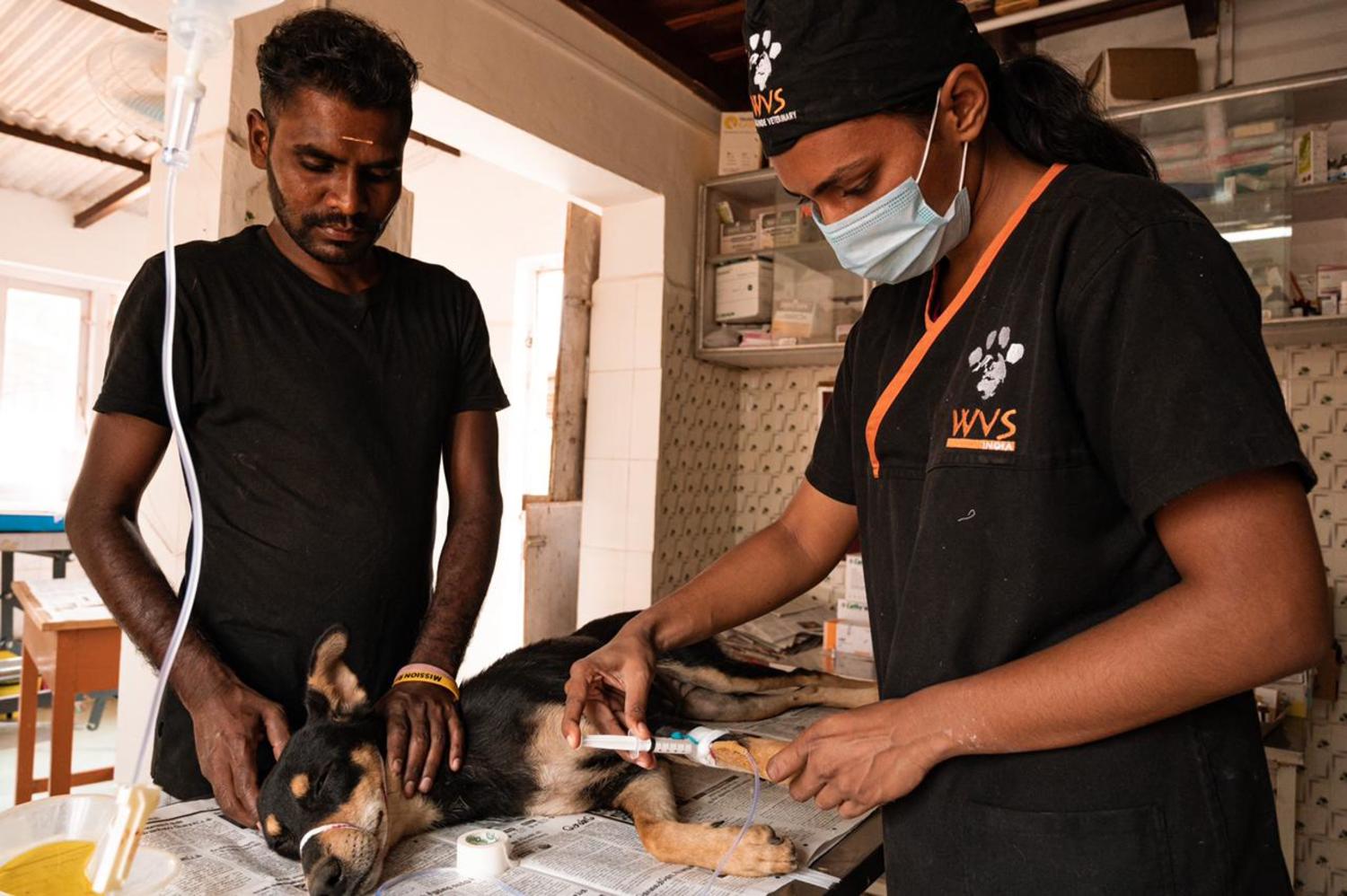 Through vaccination and sterilisation, we can create healthier and more stable dog populations, and ultimately, give wildlife a fighting chance.

It’s a big job, so we conducted the project in three phases. We started by travelling from village to village, administering the initial distemper vaccination to dogs, many of which were free-roaming owned dogs. We then began the sterilisation surgeries, safely and expertly spaying and neutering dogs and allowing them to recover in the kennels prior to release. Furthermore, we finished by administering distemper booster vaccination to the dogs four to six weeks after the initial vaccination. All dogs that were neutered were also vaccinated against rabies.

The target was to vaccinate 300 dogs against distemper and to sterilise and vaccinate 150 dogs against rabies, but we surpassed it. With additional funding from different individuals, we delivered 1,055 DHPPi (six-in-one) vaccine doses, administering the first and second dose to 268 dogs and the first dose to 519 dogs in just three months. We sterilised 163 dogs and vaccinated them against rabies at the time of surgery, and administered an additional 165 rabies vaccines in the field. 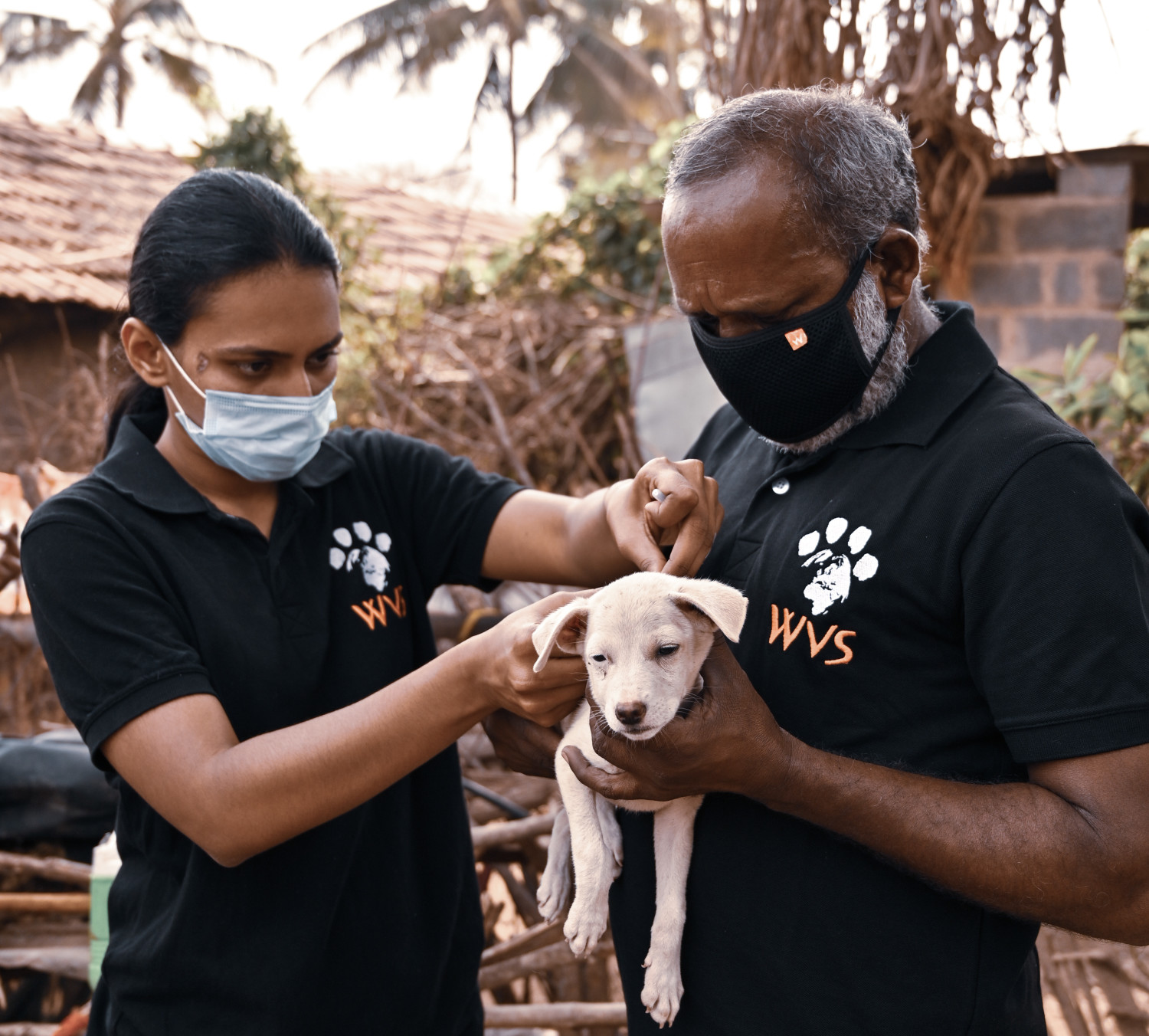 With this kind of approach, repeated annually, records of vaccination and sterilisation can be maintained, and an example can be set for how rural areas, especially in regions with significant wild cat populations, can protect wildlife from the risk of canine distemper, as well safeguard both humans and animals against rabies. A One Health approach that can save countless lives.

Besides reducing the risk of distemper transmission from domestic dogs to wild animals, distemper vaccination is important for the health of domestic dogs. It is a disease that can cause devastating outbreaks with high mortality and if that happens following a spay-neuter programme, it can influence the public perception of the benefits of birth control surgeries. In these rural communities, many would associate the death of their dogs with the surgery that had been done some weeks before, not understanding about the distemper disease, and how it can be prevented with timely vaccinations.

This is not the only misconception we’re trying to fix. In India, it is also a commonly believed myth that sufficient vaccination coverage among free-roaming dogs is impossible to achieve due to inability to the catch dogs. To many, this is the reason why diseases like rabies and distemper continue to prevail. It’s a belief that unfairly places the blame on free-roaming dogs and often leads to mistreatment. 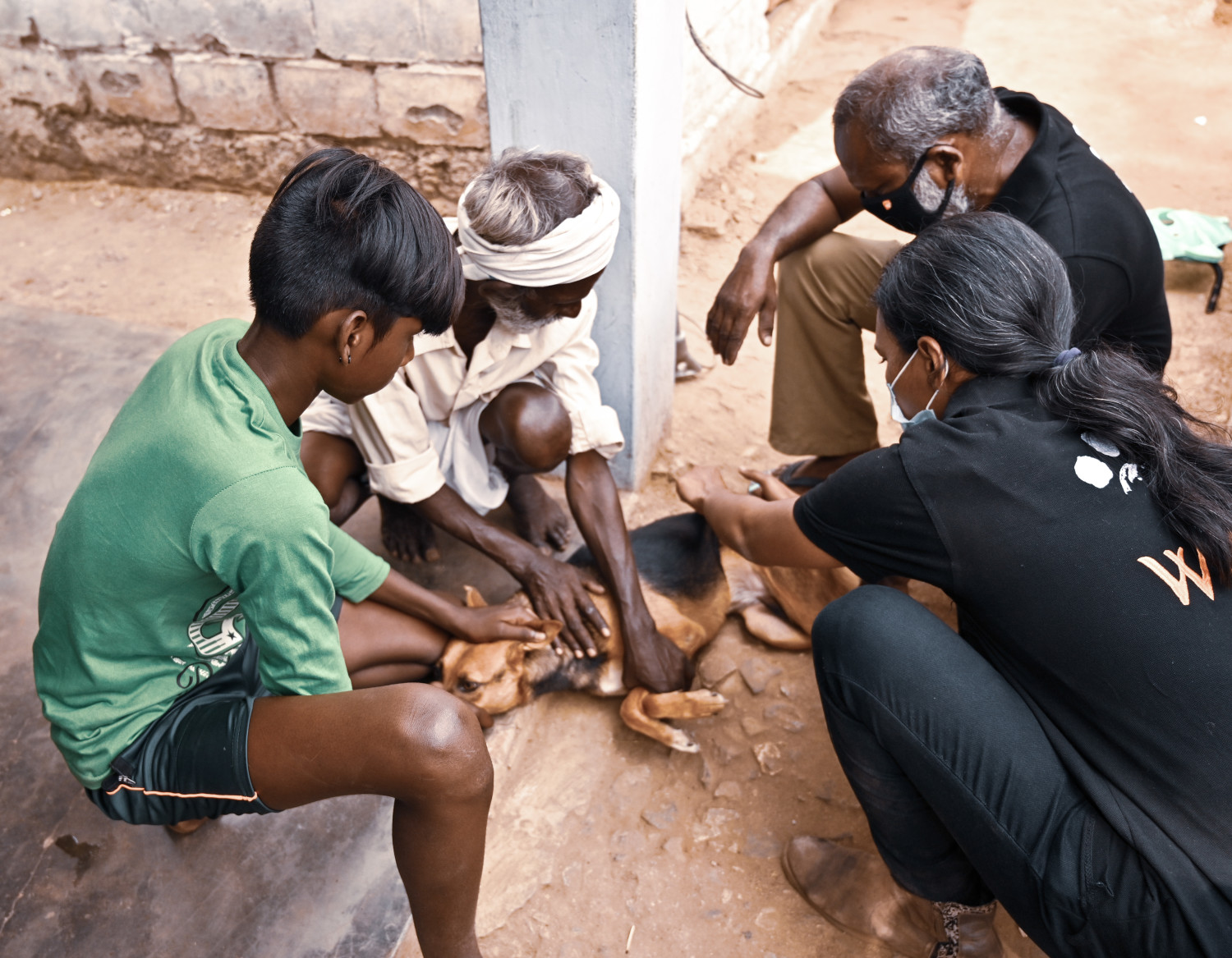 By working with these rural communities, we’re not only supporting the health and well-being of domestic and wild animals, but opening up the eyes of the local people to the life-changing benefits of expert vet care, and how wild and domesticated animals, and people, can live healthily side by side.

The programme has also given us the opportunity to survey the local dog population, focusing on the general health of the animals and whether they’re sterilised or not. When we first arrived, only 38% of roaming dogs were sterilised as an average across our target villages. One month later, during which time we operated on 154 dogs, the sterilisation coverage increased to 59%. A huge win in the project’s pilot year. 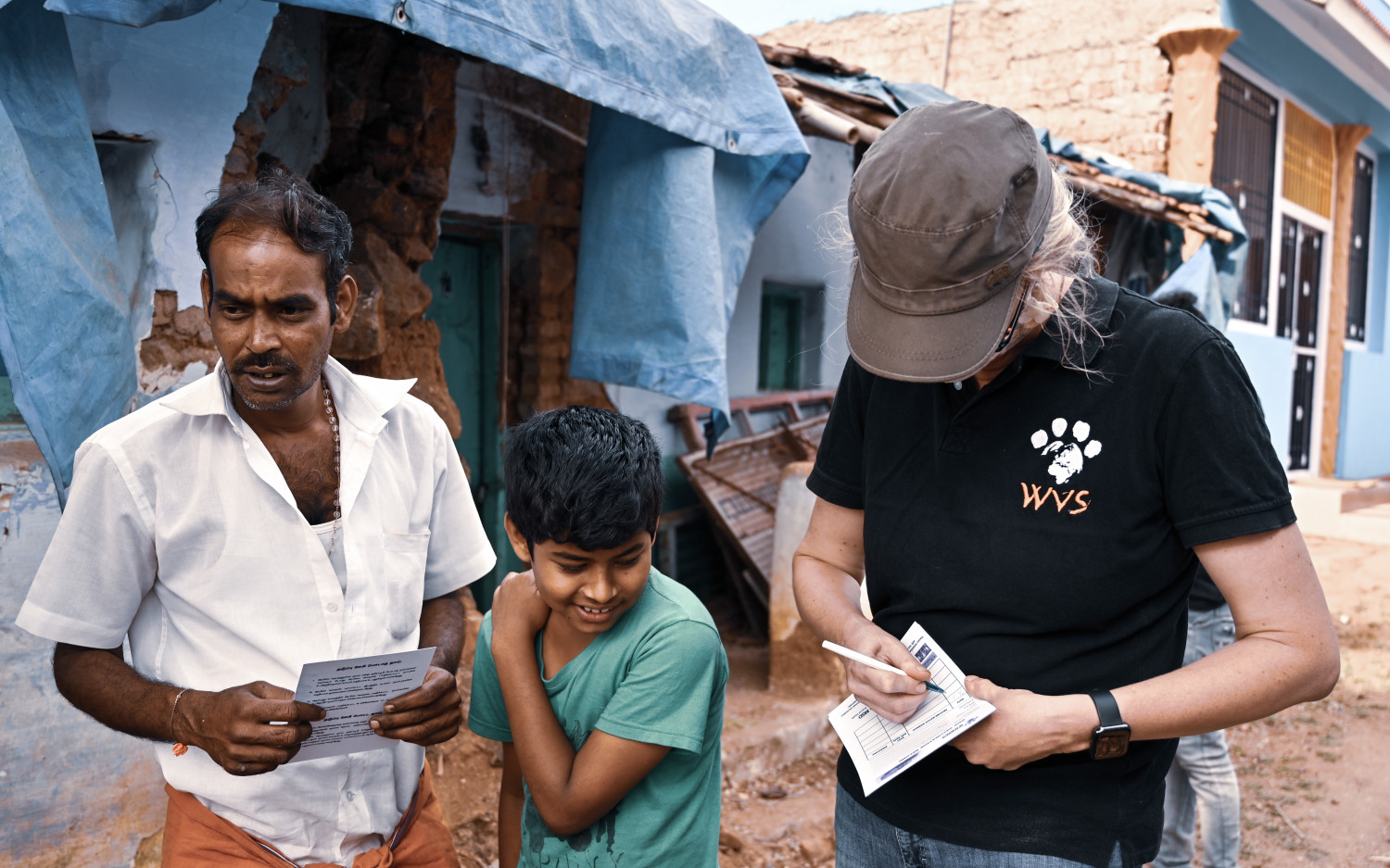 Managing the project in a three-phased approach also enabled us to follow up on the wound healing and recovery of 61% of the dogs sterilised, 109 in total. Of these, 95% had no complications from the animal birth control surgeries and in the other 5% of cases, the owners observed only minor complications like scrotal swelling or inflammation of the ear notch. This is very valuable information for us and always further confirms our view of how good quality surgery improves the welfare of animals in many ways, including allowing faster release from the kennels.

This life-changing outreach project would not have been possible without funding from the Durga Wildlife Fund, or implemented without the cooperation of the Nilgiris Forest Department, who ensured that our team was able to visit even the most remote tribal villages within the Mudumalai area. Thank you for your partnership, and for helping us increase immunity against devastating diseases in this part of India, for the future of dogs, people, and susceptible wild animals, like critically endangered tigers.

Learn more about our efforts to conserve wildlife through expert vet care, from treating injured zebras in Malawi to caring for sick and orphaned elephants in Myanmar.