A Home for Ajayu: Ending Wildlife Trafficking in Bolivia

Ajayu was an Andean bear cub living with his mother in the wild, calling the mountains of Bolivia his home. However, in 2016, this peaceful life was destroyed when wildlife traffickers killed his mother and took Ajayu. He was taken to a small village in Cochabamba where he was kept in a cage. Scared and alone, he tried to escape, but this turned out to be the worst day of his life.

The community began beating him, throwing stones at his head and trying to tie him up with ropes. Ajayu suffered a fracture to his zygomatic bone (cheek bone), lost his right eye, and received several deep cuts to his nose, eyes and face. He was bleeding extensively but continued to fight for his life with everything he had.

Thankfully, the police were called to end this monstrous treatment and Ajayu was immediately flown to La Paz zoo for treatment. The team from WVS supported charity La Senda Verde (LSV) met him at the zoo, ready to assist with his surgery and care. He arrived at midnight the following day, his face swollen and screaming out in pain. The LSV team had never heard a sound like it. 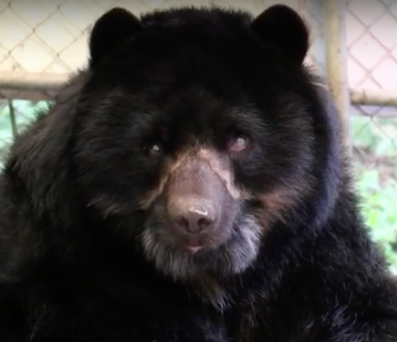 Surgery was performed on his face to fix the cuts, prevent an infection in his jaw and remove a cataract in his remaining eye, the first cataract procedure to ever have been performed on a bear in Bolivia. The operation went well, and although Ajayu was left blind and with limited sense of smell, he survived. He was put on strong medication and pain relief and just the next day, began eating again. 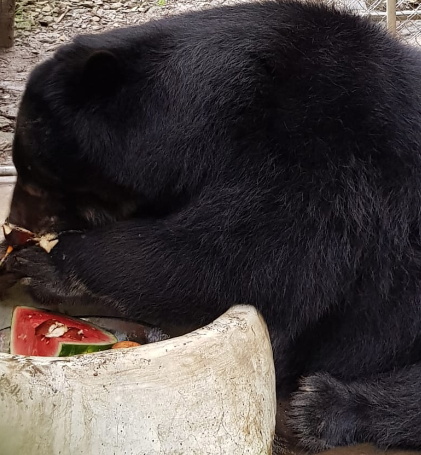 Ajayu was transferred to the LSV sanctuary just outside of La Paz, where an enclosure had been built for him, with no obstacles or areas where he could injure himself. He became the third Andean bear to live at LSV and soon began exploring his new home, walking the same route each day whilst he adjusts to life without sight or smell. He received healthy meals each day and has learned to trust the team at the sanctuary, and enjoys nothing better than relaxing in his hammock! 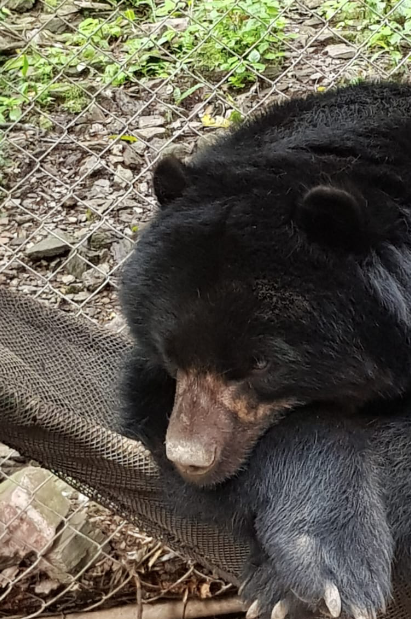 There was one issue with Ajayu’s new home however… and this is where WVS stepped in!!

The spider monkeys that live in the neighbouring enclosure to Ajayu soon discovered he was blind, and being their nature, often sneaked into his enclosure to steal his food. Something needed to be done! It was decided that the best course of action would be to attach a mesh roof to Ajayu’s home, sealing it off from the monkeys! With thanks to the Marchig Animal Welfare Trust, we were able to fund the build of this roof and improve his enclosure, helping this bear to finally enjoy his meals in peace.

It may only be a small difference in Ajayu’s difficult life, but it has had a huge impact! He is now a strong adult bear, enjoying his life in the safety of the sanctuary! In the local Aymara language, Ajayu means spirit, and despite his ordeal, this bear has shown he certainly has a strong spirit! The team at LSV are now encouraging the local authorities to put a protection plan in place for Bolivia’s Andean bears, and hope to share Ajayu’s story to promote a new law to prohibit wildlife trafficking. It is hoped this law will be named after this incredible bear: Ajayu’s Law! 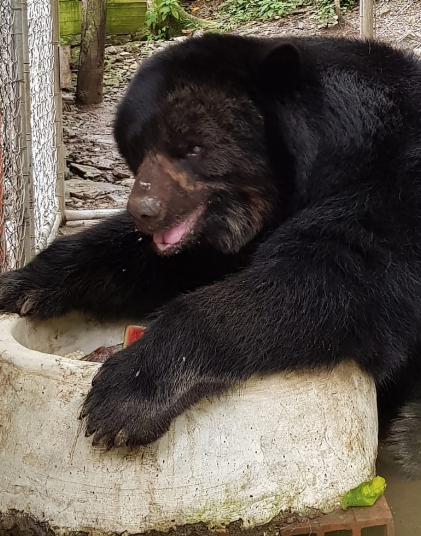 WVS is proud to play a part in this incredible rescue and help ensure animals like Ajayu continue to lead a happy and healthy life. Without your support, we would not be able to assist centres like LSV that are doing so much to help animals in need!

If you would like to hear from the LSV team or listen to Ajayu’s story as told by himself, please watch these incredibly powerful videos created by LSV: http://www.sendaverde.org/roof-for-ajayu/